Over the course of a year, we attend a lot of trade shows. And we’re always able to use what we learn to optimize our own booth designs for the future. Here are a few trends I noticed while walking the floor at the International Roofing Expo (IRE) last month that you can keep in mind when designing your next booth space.

This year, I was reminded how important it is to approach each trade show with fresh eyes. Because when it comes to first (or second) impressions, one size cannot fit all. Oh, I know the reality: marketing budgets usually dictate a one-size-fits-all booth. But there are ways to compromise, rooted in good, strategic design from the very beginning.

The average booth will cost you about $100 per square foot all-in*—and that means your booth has to work hard. So, when you’re mapping out your next booth design, think beyond the show at-hand—consider all of your shows for the year.

The biggest difference between IRE and other shows (like IBS/KBIS – read our post here) is scale. Overall, it’s about 1/5th the square footage, so you must do more with less. As a result, there were fewer big booths and many smaller booths which were regionally focused or exhibited by companies with one very specific product or tool to sell.

We kept this size difference in mind when developing a booth for our client, Firestone Building Products. We purposefully designed the booth to be modular, so that Firestone had the ability to use pieces of the larger setup for regional shows like IRE.

The 3D rendering below shows our original plan for bigger shows, with all the bells and whistles—including the show-stopping, two-story meeting space. However, other elements, like the video kiosks at the center of the booth (shown in the second image) and the large three-screen TV monitors, could easily transfer to smaller shows and tell the same story in an engaging and interactive way. 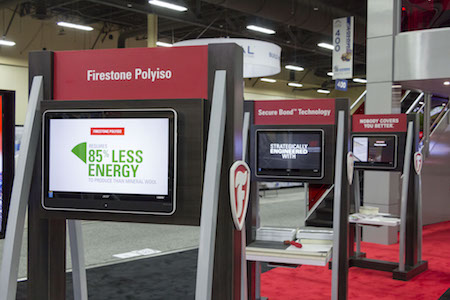 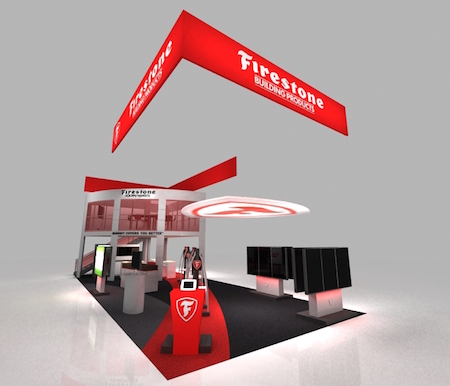 When you’re at a larger show, the options for your booth are wide open. And with a very diverse audience, they expect a little more “wow factor” as a result. However, regional shows are great for face-to-face interactions. I cannot tell you how many times I overheard “I’m here to meet up with __________” or “I just want to put a face to the name.” Your booth enables that interaction, so design it appropriately!

Perhaps you perform fewer product demos but create more meeting spaces on the floor or, even better—lounges! Many exhibitors created sitting areas (and even four-seat mini lounges) with TVs and brochures to drive a more conversational environment. Some used large touchscreens to deliver information interactively.

Note: As a marketer with a passion for print, I hate to tell you, but fewer and fewer exhibitors are handing out brochures—you can have them sent electronically instead. This doesn’t mean print pieces don’t have their place, just keep that in mind if budgets are tight.

This has been something I’ve said in the past, but this was even more apparent in 2017 at IRE. Two major companies sponsored adjacent education spaces which served to make their booths appear even larger than they were. And both of those venues were packed—one even went so far as to simulcast the presentation to their in-booth lounge.

The task of educating trade show attendees doesn’t need to fall only to your internal staff (although that positions you as a great thought leader and a supportive partner). With the help of your marketing agency, you can invite knowledgeable and relevant third-party speakers. The speakers will appreciate the exposure to their personal brand, and you will be seen as the kind of partner that values delivering fresh content to your customers. Win-win!

This is just a small sampling of what you should consider when mounting your next trade show. When it’s well-planned from the beginning, with a design that is scalable with an opportunity to customize messaging depending on the make-up of the attendees, you’re set up to make the most of your trade show investment.

What questions do you have about trade show booth design? Let us know in the comments below!

Want to know what we’ve seen—and learned from—at other shows this year? Check out Creative Trends at IBS/KBIS 2017and B2B Trade Shows: Turn Customers Into Loyalists.

* From “What does it cost to attend trade shows” from E&E Exhibit Solutions.