The energy from a conference like Content Marketing World (CMW) is addictive. Two days of insights from the equivalent of a Content Expert All-Star Team is at once fulfilling and frustrating.

Why the mixed reaction? Because applying theories and best practices aren’t easy when every client breaks the mold. Variables such as budgets, risk tolerance and timing are just a few of the potholes on the road to success … if we let them stop us.

Now that I’ve tweeted some of the top takeaways from the conference, which took place in Cleveland earlier this month, I feel compelled to apply them to my daily work with current and prospective clients. As the always enlightening Andy Crestodina of Orbit Media said in his keynote, blogs ought to have a POV and/or exclusive data. Here are several of my favorite POVs:

Enjoyed this takeaway from a presentation by Mike Agron of WebAttract, a guy who is so into webinars that his license plate is WEBINR. His recommended approach is to:

In other words, look at webinars as an opportunity to engage with your audience, not just speak to them

Make customers the heroes of their own stories.

This statement from Nicole Smith, Global Digital Marketing Strategy Lead at Dell, cuts to the heart of what we need to do in B2B content generation. Truth is, no one cares how great our company or products are unless we make it matter to them. The best way to get this across is to get someone to say it for us, with excellent storytelling that puts the reader/viewer in the place of the peer telling the story.

Show potential customers why sticking with the status quo has costs.

When we’re marketing to B2B audiences, this is essential. Tim Riesterer of Corporate Visions spelled this out in his presentation about proven ways to activate buying intent. He presented research that he compiled, in partnership with the the Stanford University Graduate School of Business, on how status quo bias will stop the sales process cold if we don’t address it effectively. He suggested using powerful content (an ebook, infographic, etc.) to show how shaky the current situation is for a potential customer and, in contrast, how a new approach/product could ensure a better future.

Ask kids a question: What is a Kronkiwongi?

This brilliant Lego campaign showed the power of unleashing a passionate audience by asking kids to create an object with a ridiculous name. Engagement went up by 61 percent thanks to a worldwide partnership with Facebook and blogger outreach, among other tactics, said Lego Global Director of Social Media and Search Lars Silberbauer during his keynote. Lego’s marketing goals are to encourage people to build together and show the pride of their creation. This video helps show how they accomplished both.

Change guitars for every new song. 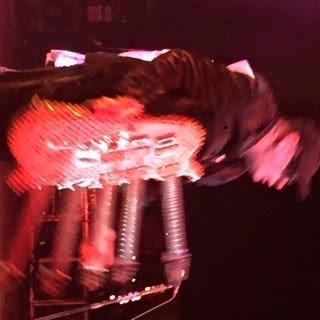 Cheap Trick guitarist Rick Nielsen owns hundreds of guitars, so it’s no surprise that after each song at the Cheap Trick concert at CMW, he would exit the stage and come back with a distinctly different one. When people think of Cheap Trick, Rick’s guitars, including the ridiculous five-necker, come to mind.

His role as primary songwriter for the band and his instruments, which were featured in a museum exhibit a few years ago, helped build and sustain the band’s brand all the way to its Rock and Roll Hall of Fame induction this year. Now that’s great content marketing.